Having an entrepreneurial dream is part of the desires of many people. But putting your ideas into practice and taking action takes courage, determination, and – why not? – inspiring stories of entrepreneurs who got their hands dirty, rolled up their sleeves, and turned into reality what they always wanted to do: have their own business!

To help you create even more will to be an entrepreneur, we have separated four interviews with entrepreneurs circulating on the internet to see examples of entrepreneurship and success stories that may be the motivation you need to pursue your dream!

Pequenas Empresas & Grandes Negosyo’s magazine published this interview between Priscila Zuini and businessman Alexandre Tadeu da Costa, founder of Cacau Show. This great company started when Alexandre had to turn around, at the age of 17, to deliver a sale he had made of two thousand 50-gram Easter eggs, but the company that made the chocolates no longer had that size available. The experience of producing eggs led him to see all the perspectives of having his chocolate production.

I opened the first store in 2001, and do you know how many units the franchise currently has in Brazil? More than 2 thousand!

See what it means to be an entrepreneur in the words of Alexandre Costa:

Something wonderful. Making the most of it, pouring your passion into something, and then reaping the rewards of it is inspiring and rewarding. However, it is very important to take into account that becoming an entrepreneur requires a lot of focus and planning. It is essential to seek differentials and constantly reinvent, looking for the new and the surprising

Alexandre also says that it is crucial to have a good relationship with people to be a good leader, and he even compares the team with a family.

Moisturizing creams. In addition to the virtual store, the company has its products in 20 stores in states such as São Paulo, Minas Gerais, Paraná, Rio de Janeiro, Paraná, and the Rio Grande do Sul.

Our company is unique in taking care of nature and passing along knowledge of these rare fruits to people. Entrepreneurs are able to bring their own values to a business, and this is hard to replicate

Among its long-term plans is the Sartori Institute, dedicated to the preservation and research of exotic fruits.

China in Box founder Robinson Shiba talks about his company

In addition to being the founder of China in Box, Shiba is president of Trend foods. In this interview with Mariana Amaro, from Voice S/A, he tells a lot about his story. Successes and failures.

Yes, the entrepreneur’s life is not easy! But, after selling his dental practices and taking a loan from his father, Shiba got the $60,000 he needed to open his first store. It took a while, but in a few years, it already had 35 franchised stores. And the 25-year-old got excited, he says:

I was 25 years old. At that age, you’re not afraid of anything, you think you’re immortal and that everything you do will work out

There was no control over food, waste, or dishes, which made a profit and which made a loss. As a result, franchisees received the revenue and sought out their suppliers.

But the entrepreneur knew how to curb the aggressive growth, make a comeback, and today, his company earns 430 million reais a year. Check out all the details at the following link, including his attempt at China in Box internationalization in Mexico and Argentina.

Mariana Desideria was the one who brought the information in this article from Exam magazine. And you know how Taylor, a student from the US state of Alabama, came up with the idea for his business that already had a 30 million dollar offer to buy?

In an entrepreneurship class where I was supposed to present a new business project. Yes, education is critical!

revealed in an interview with CNN 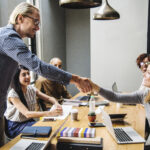